Woodbridge “Woody” Parker Brown (1912–2008) was an American surfer and watercraft designer best known for inventing the modern catamaran. He was also instrumental in promoting the growth of surfing in the mainland United States; among his accomplishment in surfboard shaping was an early fin design.  Woody was a legendary big wave surfing pioneer, also known for having a brave heart who demonstrated epic feats of courage, breaking world records in a glider airplane and being one of the world’s first individuals to surf big Sunset Beach in the early 1940s.

“I have to admit, I lived in the best time. I couldn’t have had a better life. … I was just lucky. I saw the old Hawaiian people and how they used to live. I got the tail end of the true Hawai’i. I’m so thankful and appreciative for that.” 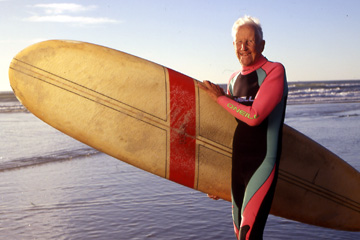